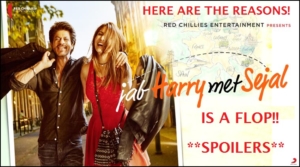 Top Reasons why Jab Harry met Sejal is a Flop…Spoilers Ahead
Jab Harry Met Sejal releases today in India and Watch It Or Not has got the initial reviews and the critics and audience have rated the latest Shahrukh Khan and Anushka Sharma starrer Jab Harry met Sejal as a FLOP!, Read on to know why

Why Jab Harry Met Sejal is a Flop!

Shah Rukh Khan “SRK” is very rusty and underwhelming in Jab Harry met Sejal, His character Harry’s troubled existence and his ambitions are not explained much in detail,  Just a scene about his unfilled ambition of becoming a singer is half-baked and conveniently added to justify the lead hero’s tendency to break into throaty songs thus leaving the viewers unsatisfied with the twists.

The second of Jab Harry met Sejal dives into un-necessary long and boring melodrama, With the protagonists delve on and on in search for a ring, the audience is wondering where the movie and story is heading on plus the climax isn’t ground-breaking and is studded with corny, saccharine dialogues between two lovers. The scene just before the interval, where the duo challenges each other that they won’t fall in love, raises hope of an Imtiaz Ali twist. Alas, there is none! Similarly, 20 minutes before the film ends, is a scene when the duo separates and you feel there will be an aha! moment, only to watch it slide into a predictable abyss

Sejal, who consistently expresses her disdain for professional tour guides indicating their class divide, is constantly seeking validation from a stranger like Harry. Her provocative, flirtatious banter in which she asks him if he finds her as physically desirable like the women that he normally dates is disturbing to watch. Why does she need an approval from a person whom she doesn’t particularly respect? She taunts him about his job, but wants him to desire her in the next breath has toxic bond written all over it.

Anushka’s Sejal could easily had been any girl and not just a gujarati, Her gujarari accent in Jab Harry met Sejal sounds unbelievable and cliched! Stereotypes about Gujaratis being all about money (Baat hamesha paise ki hi hoti hai) isn’t the cliché you expect from Imtiaz Ali who once confessed in an interview that today’s cinema is today’s literature. Well, this one is a bad, plagiarised copy of his previous scripts that were quite literary.

The script is wafer-thin and it’s been done to death by none other than Imtiaz Ali in each of his earlier films—be it Jab We Met, Cocktail or the recent Tamasha. It’s the routine girl is engaged elsewhere story but she discovers half-way through the film that she is actually attracted to someone else. In this case, Sejal is engaged to Rupen but actually ends up falling for Harry. What makes this film watchable though is the presence of Shah Rukh and Anushka both of who are in top-form in their Punjabi and Gujarati avatars. In fact, SRK is like old wine, the more he matures, the better he loves. But the chemistry between Anushka and him is not crackling for sure.

First half: breezy but unabashedly banal. Second half: riddled with toe-curling romantic mush. Sum total: a journey without maps that weaves concentric circles around sweet nothings and empty prittle-prattle. That, in a nutshell, is Imtiaz Ali’s perambulatory rom com Jab Harry Met Sejal. It leaves you wishing they hadn’t met.Jab Harry Met Sejal is cinema’s equivalent of a shiny bauble that glitters wholly in vain. Watch it only if you fancy a vicarious romp through Europe with an off-colour megastar trying hard to get going.

As Harry and Sejal wade through philosophical bullshit about finding oneself, finding the one you are meant to be with and so on, Jab Harry Met Sejal gets more exasperating with each passing minute. There is a fantastic Indian word for pretentious art of this kind: pakau.

Finally, it comes down to counting the momentary pleasures of this disappointing film: a bit of the sparring between Harry and Sejal, the breathless awareness that the other exists, and the realization that without the other, it’s simply not worth it.

The first half coasts along on charm, small moments and laughter but the film derails in the second. Imtiaz and Shah Rukh coming together should have created a romantic classic. Instead Imtiaz has made his weakest film to date. Jab Harry met Sejal doesn’t touch your insides. It’s not truthful enough to move you.Which just broke my heart. Because I really wanted to love this film.

The film starts out light and breezy. The first half coasts along on the strength of the actors’ charm and their chemistry, even the verbal sparring between them delivers many laughs. But post-intermission it slips into a quagmire of pointlessness and repetition before it becomes a complete slog. There is just not enough meat on the bones to keep you invested in the protagonists’ journey, or in their relationship, which feels clumsy and muddled but not in an interesting, honest way.

If there is anything we know about Imtiaz Ali’s love stories, it is that they are not for everyone.’Jab Harry Met Sejal’ is shot in the beautiful locations of Prague, Berlin, Holland, Amsterdam. So, while you are lost wondering where the movie is heading, the scenic beauty keeps you hooked. The movie goes through its ebb and flow, and all you can do is enjoy the good bits, till they last.So, if you are a fan of the leading actors or have a Sufi heart, go watch this movie.

It breaks my heart to write this, but Bollywood superstar Shah Rukh Khan, the rakish matinee idol who could romance a stone with an inherent sexiness and suaveness, has become rusty. As far as stories go, there’s not much for the actors to hold on to, but the pair manages to keep us hooked in the first half.But the second half spirals into this cloyingly intense and melodramatic territory.

Jab Harry Met Sejal is a film you want to like but when you see the ‘Babe becoming Babita’ formula repeated yet again, you wonder why a filmmaker, known for his progressive, unusual films succumbs to clichés like this one.I go back to the sublime Rockstar that ended with a Sufi quote – ‘Beyond good and bad, there is a field, I will meet you there’. This film espouses the beautiful thought of ‘Home is a Person’ . Wish the script went beyond these one-liners and took us on a unique journey with a Geet or a Jordan instead of this been-there-done-that European tour. 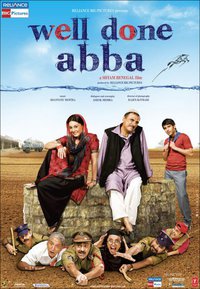 November 11, 2011
0
Shootout at Wadala Movie Review and Audience Verdict
Why Teen Patti is a Clear Rip-Off of 21 and a Flop for Card Enthusiasts