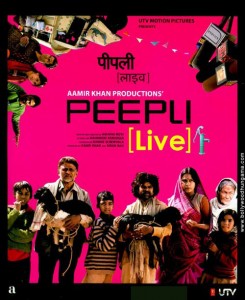 Peepli Live Watch-O-Meter – 92% of the Audience voted Peepli Live as a Hit!, Definately Worth Watching in a Theatre.

PEEPLI [LIVE] is sure to ride initially on the strength and credibility of its iconic actor/producer Aamir Khan and once that is achieved, the powerful content is sure to speak for itself. PEEPLI [LIVE] is a film that would not only appeal to Indians, but is sure to reach out to audiences beyond India. Simply brilliant!, Final word? This tragi-comedy, a brilliant satire, is not to be missed.

Peepli Live is insufficiently advanced satire, but it is very funny and pertinent.

Unlike satires that coast on winking self-satisfaction, Anusha Rizvi’s debut is both a heartfelt and a genuinely funny skewering of India’s convoluted caste-consciousness

Anusha Rizvi’s ‘Peepli Live’is an unusual story told in a bittersweet voice. Watch it because it’s an important story and because it’s made with heart.

Writer-director Anusha Rizvi’s debut feature, a disarmingly simple but remarkably powerful film, is a major triumph. She taps into the power of the medium to narrate a story rooted firmly in the depressing realities of rural India, but without ever going into paroxysms of self-righteous indignation.Peepli Live should rank among the best films made in India since the new millennium began. It has its heart in the right place, and it’s a heart backed by a ticking mind.

the most intelligent and humorous Indian commentary in long.

With a ‘live’ in its title and a ‘suicide’ in its theme, Peepli Live makes for a perfect paradox. And through such contradiction, it highlights the absurdities of existence. Visiting this village is strongly recommended!

Peepli [Live] is a well-researched, brilliantly-written and effectively documented creation that hasn’t negotiated its wry vision for big screen. I’d go to the extent of saying it’s the best Hindi film I’ve seen this year. And I honestly don’t think whatever is left of 2010 could offer anything better to contest that.

Peepli Live should have been a surprise package. But given the marketing blitzkrieg that preceded it, it ends up as something that probably falls a wee bit short of what you imagined it to be. Nonetheless, pay a visit to Peepli. The film is among the most courageous you have seen in a long time.

Rizvi gives us the zor ka jhatka dheere se. While she highlights all the malaise, the movie at no point becomes visually displeasing. It shakes up our conscience and wakes us up from our slumber but through bouts of laughter.

PEEPLI [LIVE] is a brilliant satire which is riveting and heartfelt. Most importantly, it makes you think, and rethink. After LAGAAN this could be yet another journey for producer Aamir Khan all the way to the Kodak Theatre. Surely worth having a ‘peep’.

Peepli Live is an entertaining, original and relevant film, which tackles a serious problem with just the right touch of satire and humour. This is a slice of real cinema, raunchy, rancid and rare, and may we get more of the same please.

The nature of storyline required a certain level of sensitivity, which the director has shown in full measure.It’s a winning proposition for one and all. A brilliant satire.

What unfolds is a tale that’s immersing, entertaining, topical, yes; but not all that insightful.

In spite of having that heart of gold, Peepli Live lacks a certain profoundness. The movie does nothing but sit on a fence, showing you that there is a solution but no one wants to work it out.

On the whole, Peepli Live is mainly for the multiplexes and the big cities and it will fetch handsome returns from there.

Peepli Live is a film with an earnest message, approach and story and it certainly deserves its place at the box office. This film further strenghtens the fact that content is king and you don’t need big names to make a good film. Recommended.

Above all, the most valuable effect of Peepli [Live] is that it makes you care, Bottom words: Do visit this Peeplidom..especially if you relish reality bytes.

Writer-director Anusha Rizvi’s debut feature, a disarmingly simple but remarkably powerful film, is a major triumph. She taps into the power of the medium to narrate a story rooted firmly in the depressing realities of rural India, but without ever going into paroxysms of self-righteous indignation.