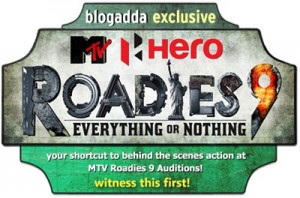 Thanks to the Team from BlogAdda  (Harish) and Gayatri from MTV India, I got a once in a lifetime opportunity to cover the MTV Roadies 9 Audition in Hyderabad as a Blogger.

This was a unique opportunity coz I could not only see what goes behind the scenes on part of the crew to select the perfect “Roadie” but also witness first hand how the audience feels when they participate in India’s biggest ever reality show – MTV Roadies.

Start of the Eventful day –

I reached the venue Sri Sathya Sai Nigamagamam Trust in Srinagar Colony, Hyderabad at 11.30 AM and was promptly received by Gayatri at the main gate who took me directly inside to the main stage. I was definitely not surprised to see a huge turnout of more than 2000 people  mostly college students waiting patiently in the auditorium for their turn to attend the Group Discussion Round (GD Round) but before that everybody including us were waiting to see the 3 R’s on stage – The Main Pillars & Face of MTV Roadies – Raghu Ram, Rannvijay and Rajiv Laxman.

To curb ours and the waiting crowds anxieties, The MC – I guess her name was Kishwar invited a few hot girls from the crowd and made them do a Ramp walk for a start, and if that wasn’t enough to raise the temperatures 😉 She made them perform in a mini dance competition on popular Bollywood ITEM Numbers!! in which after every song 1 girl got eliminated based on the crowd response till 1 remained in the knock out phase. The crowd went berserk seeing the hot girls performing their ultra hot dance moves to every possible recent Bollywood Item Song ranging from Sheila Ki Jawani, Jalebi Bai to Munni Badnaam Hui. 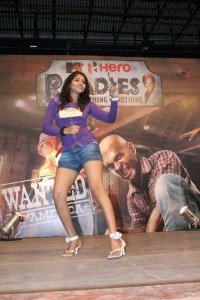 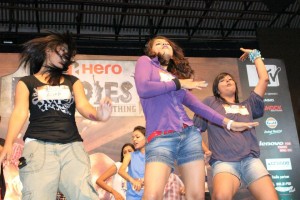 And then at sharp 12.55 PM, The 3 R’s finally arrived on stage and the audience welcomed them with a huge roar of appreciation. Rannvijay also took time out to promote his movie – Mod on stage. Must say Rannvijay has a very strong female fan following in Hyderabad as well as most of the girls came to me asking me to click a photo of him as I the lucky one was standing right near the stage as part of the Press to click exclusive pics of the 3 R’s.

Raghu, Rannvijay and Rajiv at the MTV Roadies 9 Auditions in Hyderabad, 2011 Video

After this, we were informed that me & other bloggers will have an exclusive time with Raghu, Rannvijay, Rajiv and Bani in the production room where they will interact with us and answer any questions that we might have for them. But since they were interacting with the Print Media first and with us later, I decided to move to the next floor to check out the Group Discussions Rounds.

For the Group Discussions Rounds there are 7 Moderators who are MTV Crew members, They take 20 contestants into 1 room and give them a topic to speak about & give their opinion in Hindi only, Normally 1 round lasts 10 to 15 minutes and each member can speak in favour or against the topic. The contestants can range from only boys, only girls or even a mix of both.

Some of the topics covered in Group Discussions (GD Rounds) were: 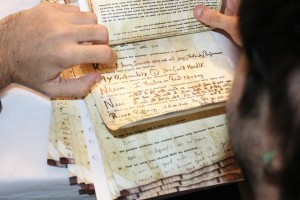 I attended Group discussions held by 4 moderators in which 3 were MTV Producers and 1 was Mrs Raghu Ram herself  by which I mean Sugandha Garg who featured in 2 popular bollywood movies – as “Shaleen”, Genelia’s friend in “Jaane Tu Ya Jaane Na” and as “Zoya” in Ali Zafar starrer “Tere Bin Laden”. The other moderators were Rishab Soin, Rishab Sudin and Zorawar.

Sugandha appeared to be the most strict of the lot as she was following a unique pattern in judging the ideal candidate in her GD Rounds since she was making 1 candidate speak for or against the topic and then based on the answer making another candidate chosen at random to speak with the first candidate to counter the 1st candidate’s point. Sugandha also added that  for a participant to qualify (as per her moderation), she will look for someone with good personality and a spark!. Both Rishabs followed a linear approach and made each candidate speak their point across in a turn by turn manner whereas Zorawar was the friendliest of the 4 and since his was the last GD Round of the day and he knew that all contestants by now knew the GD topics so he advised the contestants to speak on the most adventurous event or thing that they have done in their lives.

I want to add something here – Normally when we see MTV Roadies on TV. We only get a glimpse of Group Discussions and then the focus is on the personal interviews between the contestants and the hosts – Raghu, Rannvijay and Rajiv, but what we don’t get to see are the Group Discussions in detail and the difficult challenge which lies in front of the 7 moderators in picking up the final probable’s among the thousands who will finally get shortlisted to attend the Personal Interview Round (PI Round) with the 3 R’s.

Clearly hats off to the moderators who remember each viewpoint of every contestant who has taken part in the GD, The moderators go through each form and note every point and remember every contestant in their brains! So that they can choose the right one, Must say after I ended one complete GD session with Rishab Soin, I was completely Zapped and Confused as to what contestant said what and could only salute the moderators that they have been assigned this tough job of shortlisting the ideal candidate for the possible title of a “Roadie”

Couldn’t agree more to Zorawar – Another Moderator, and MTV Producer’s comment after the last GD session of the day got over and when he discarded the last pile of rejected candidate’s forms and he said “Yaar! Why do I get to decide the fate of so many participants!!! It hurts me to reject so many of them.”

Could not disagree more and I ended up saluting the patience levels of the Moderators who have to select a Roadie among thousands of applicants after going throughly through each form and every word spoken by more than a Thousand people in One Day.

In between the GD’s we bloggers received an SMS from Gayatri stating that the Rannvijay and the twins Raghu and Rajiv were ready to meet us in the Production Room. I frantically rushed to the Producers’ Room and there they were within a feet’s distance away from me – The 3 R’s and VJ Bani. I was lucky to interact with Raghu who is very friendly and down to earth unlike his onscreen persona as the Swearing Angry Host! and Of Course not to forget – Rannvijay – who is not only cool on-screen but in real life as well. I asked Raghu Sir as to what does it take to be a Roadie? His simple one line answer – Not Muscular physique, No Super-Intelligent IQ- Just Plain and simple Individual who behaves and acts the way he or she is in Real-life!

I met a good hearted Sardar – Mr Shyam Singh Lal from Hyderabad who was the eldest amongst all the other participants. His ambition to become a roadie was to basically relive his old college days when he used to go out for Adventure trips with his friends.

Met a few Ex-Participants like Harshit, Nirman, Vaibhav and Vikram who all had given auditions not only last year for Roadies Season 8 but were also trying their luck this year in nearly all major cities of India including Hyderabad in their quest to become a Roadie.

All in all, A Day well spent as I got to meet not only the 3 Main stars of MTV Roadies but also got a chance to interact with the participants who aspire to become a Roadie despite rejections earlier.

A Big thanks to the BlogAdda Team, Gayatri from MTV who co-ordinated and helped us by making us a part of this memorable Audition and also to gift us a Great Roadies T-shirt. To Rannvijay, Rajiv Sir and especially Raghu Sir and who took time to answer my Questions and for being extremely so nice especially to me To Sugandha Garg, Rishab Soin, Rishab Sudin and Zorawar for explaining to me on how a Roadie gets selected among thousands of applicants and last but not the least this post is dedicated to all MTV Roadies Fans and readers of my blog.