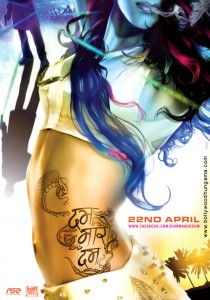 DMD has a taut narrative that doesn’t flail till post interval. It keeps you engrossed through an imaginative blend of some stupendous background music, animated cinematography and simple effective storytelling.  As far as gritty thrillers go DMD scores high. Give it a shot. If you can manage to not wince through that horrible remix where the only saving grace is a hot Deepika Padukone. There’s enough dum here to give you a movie high.

There is the stylization of the film and its dramatic narration that makes it a compelling watch. Shridhar Raghavan writes a thrilling cops and robbers tale which has some quirky banter scripted by Purva Naresh. Add to this Goa captured in glowing colours by cinematographer Amit Roy and a peppy music score by Pritam, and director Rohan Sippy gives you a film that keeps the popcorn crackling, till the very end. This one’s complete paisa vasool fare.

In the end, it’s Abhishek Bachchan who throws you with his sheer presence. He plays Kamath with just the right amount of steely nerve and naked emotions. Unfortunately it isn’t enough to lift this film from an average drugs-drama to a smart and entertaining action thriller. It’s got its moments, but they’re few and far between. It’s watchable, but it could easily have been so much more.

The narrative slumps in places, the plot has loopholes and the characters just aren’t convincing enough to grab you.

DMD leaves you occasionally on a high, but also a tad disappointed

Yes, it’s slick, stylish and well-crafted, but the fact remains that it lacks the power to create a dum-daar impression.

Dum Maaro Dum is a stylish thriller written as smartly as it is directed.

And while DMD amasses all the superficial components to create a distinctly glamorous and masculine drama, it neglects to inject the screenplay with a vital dose of slyness or sensuality to truly justify the twin Dums in the title

Dum Maaro Dum is a ‘dumdar’ thriller with a riveting plot and splendid performances. You’ll surely get ‘high’ on it.

Dum Maaro Dum does have the ingredients for an interesting one time watch. A romantic song, suspense element, an item number, action, drama etc should be reasons enough to entice the audience.

Bottomline: Say no to this Tara dum dum dum.

Dum Maaro Dum is worth a watch for the peek into the seamier side of Goa; but expecting anything other than Bollywood style thrills and chases will leave you disappointed.

Dum Maaro Dum is a very watchable film, but squanders tremendous potential in a puff of white smoke. As can be said the morning after a party with too much cocaine, all that eventually remains are a couple of good lines.

It just about makes for an enticing thriller here. There’s probably an even better film when compressed. But if you stay ‘susegaad’, relaxed, laidback, it’s unlikely that you’ll regret the promise of entertainment this picture meets in major portions. That, as you’d know, is saying a lot.

Dum bharo dum. Blow in, blow out. All right for a quick one-shot.

Overall, the flick is a stylized, crime thriller mainly aimed at multiplexes of big metros and will appeal to them more than the viewers of single screen theatres. Above average flick.

On the whole, Dum Maaro Dum has an interesting first half but a very ordinary second half. It will fail to do much at the box-office.