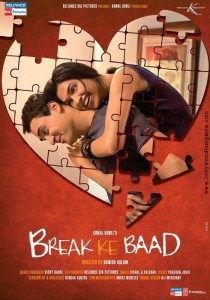 Break Ke Baad Critics Rating – 5.0/10 (An Average Movie, Watch It if you have nothing better to do!)

On the whole, Break Ke Baad has a vibrant Imran and Deepika as its USP, but a faulty and an unpersuasive screenplay as is its major stumbling block. Fails to impress!

Break ke Baad is a little better than recent outings like Anjaana Anjaani and I Hate Luv Storys. Check it out

Nothing dramatic, just fresh: Break Ke Baad is the other flavour of romance. One that you don’t find in run-of-the mill Mills and Boon masala.

Deepika Padukone plays Aaliya with a confidence you haven’t seen in her performances before, and creates a solid, believable character that’s somewhat misguided but endearing nonetheless. Break Ke Baad is essentially Aaliya’s story, with Abhay playing a supporting part in it, and the film works best when she’s at the forefront. Director Danish Aslam makes a respectable debut with a reasonably engaging film that is watchable largely for the performance of its leading lady – Deepika Padukone.

The music of Break ke Baad is soulful in bits, but the shabby story never ever takes off, while the direction remains average. In the end Break ke Baad stays a pretty but boring film.

The film progressively question human expectations and complications we call love, yet sweetly retreat at once to soul mates that last forever. The equilibrium is smartly restored.  Intellectualising further bears few fruits.

On the whole, Break Ke Baad is entertaining break (interval) ke pehle but not equally so break ke baad (after the interval).

Post-interval, the promise of delving into the complications of long-distance romance begin to dwindle as Break Ke Baad runs out of ideas, spark, focus and momentum, procrastinating endlessly

For a cushily-budgeted project, the narrative is toothpick thin. How you long for a twist or two in the plot pourri. Consequently, there is precious little by way of a conflict or substantial content.

While it is certainly not bad, there is nothing path-breaking about Break Ke Baad either. It’s time our filmmakers break free from the clutter of such conventional romantic comedies. It’s time to move on from such breakup boredom.

Break Ke Baad is possibly the best love story we have seen all this year and maybe last year too. Danish Aslam take a bow. Encore please.

Overall Break Ke Baad is a decent entertainer. This movie should particularly entertain the youth

The film’s weak foundation and lack of fun moments make it a cumbersome watch.

Watch Break Ke Baad for a mushy, sweet outing at the multiplex, preferably with a date. Its a ‘rom-com’ that gets it right.

Imran Khan and Deepika Padukone have given sparkling performances in this internet era love story. Their falling in love, then taking a break and again falling in love and the question of ‘space’, may sound familiar to Gen X. However; the screenplay of convenience and average music might prove its undoing at the box office. The film has more chances at the multiplexes of big metros than in the interiors of the country. An average flick.