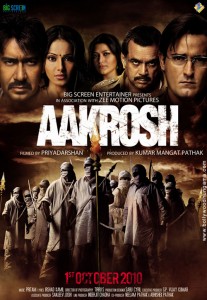 Aakrosh is not the standard Bollywood fare with the usual song-and-comedy routine. This one strikes a punch. Being an issue-based cinema, it will magnetize the thinking viewer and the intelligentsia mainly. It should find more flavor with the North Indian audience.

The film works primarily because it is paced like a high momentum thriller.

Aakrosh has moments of power but most of these are copied, some even down to the dialogue. I recommend you see the original – Mississippi Burning instead

‘Aakrosh’, directed by Priyadarshan, and starring Ajay Devgan and Akshaye Khanna  has some powerful, gripping moments. But credit for that must go to ‘Mississippi Burning’, the Oscar-nominated 1988 film by Alan Parker, of which this film is a shameless copy.

Aakrosh  is more grim than entertaining. Since entertainment is the catch word in films today and because the public likes to watch entertaining fare, this film loses out on that count. A loser! At the box-office, it will have a run which will not be exciting or inspiring enough for the kind of issue it tackles. The dull period (for the box-office) will also take its toll on the earnings.﻿

This is the sort of film that’s sold under prestigious tags of “hard-hitting” and “issue-based”. They’re a heavy assault on your senses all right.

did the director have to rip off Mississipi Burning quite so completely? Replace FBI officers Willem Dafoe and Gene Hackman with CBI officers Akshaye Khanna and Ajay Devgn, darkest Mississippi with darkest Bihar, and racism with caste-ism, steal scenes in their entirety, and you have Aakrosh. Why does Priyadarshan need to lift from Hollywood when he can quite legally borrow his own Malayalam films and make them into Hindi? Or has he finally run out original material?

Priyadarshan has constantly been arguing that he switched to mindless comedy capers from meaningful serious cinema because the latter has no takers. If this is the kind of serious cinema he has to offer, we are better off with his comedies. This is Aakroshious!

Aakrosh is not without its flaws, but it’s very engaging. It’s not all fun. Watch it for some fast-paced, action-packed chase sequences and topical relevance.

Aakrosh  is a tight film. It’s dark, it’s violent, it’s informative and it’s packed with a load of shock value which keeps you at the edge of your seat from start to finish.